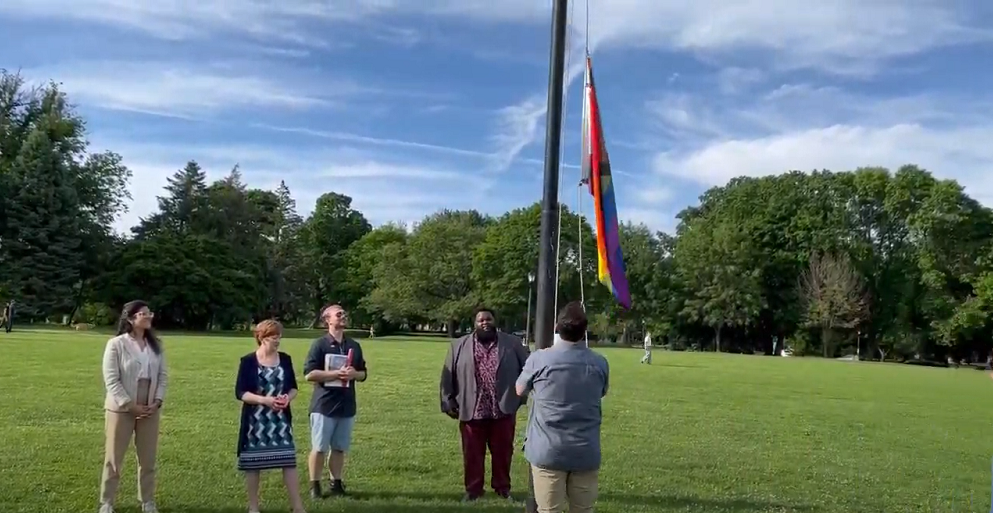 “Washington Park and the surrounding neighborhoods have long been havens for the LGBTQ+ community here in the Capital District. Parks and public spaces offer escape, refuge, and a place to connect and celebrate with friends and families,” Crumpton said.  “We are excited to see the return of the Capital Pride Parade and Festival in the park this summer.”

Albany Mayor Kathy Sheehan said, “Kicking off Pride Month with a Pride flag raising in Washington Park is fitting as it serves as the venue for the Annual Pride celebration and Say It Loud! Black and Latino Gay Pride each year. I am proud to recognize our diverse neighborhoods, specifically the neighborhoods surrounding Washington Park that have always been home to many of our LGBTQ+ residents. This flag is not only representative of these neighbors, but also of supportive organizations such as In Our Own Voices, the Albany Damien Center, and the Pride Center of the Capital Region.”

“As the representative of the 5th Legislative District I am proud that I represent the headquarters of both the Pride Center of the Capital Region and In Our Own Voices as well as Washington Park where Capital Pride is returning for 2022!”, said Matthew Peter Albany County Legislature of the 5th District. “Capital Pride is an amazing event that celebrates our diversity, our inclusiveness and is an event the whole community looks forward to every year and I can’t wait to join in the festivities.”

“I am delighted to be a part of this cherished tradition. As a Council Member, I am dedicated to making our neighborhood and our city welcoming for all. By raising the Pride Flag, we are unequivocally declaring our support for all people without regard to gender identity or sexual orientation,” said Gabriella Romero, 6th Ward Common Councilmember.

“IOOV is excited to participate in this year’s Pride Flag Raising in Washington Park! In a time where LGBTQ+ rights and bodies are being attacked and/or threatened at alarming rates, it is important to let our communities know that we are here, we matter, we are strong, and we are resilient”, said Tandra LaGrone, Chief Executive Officer of In Our Own Voices,

“Today’s Pride flag raising affirms our united response in strongly denouncing hate, discrimination, inequality, and injustice that our LGBTQ+ community continues to face, while embracing the diversity and love in our local community”, said Perry Junjulas, Executive Director of the Albany Damien Center.

“It is clear, now more than ever, that the LGBTQ+ community is under attack at every level. Queer kids’ books are being banned, trans children are illegal in Texas, Florida children can’t even self-identify in the classroom, and a sitting Senator recently claimed that Marriage Equality was not the will of the people and states should be allowed to overturn it”, said Nathaniel Gray, Executive Director of the Pride Center of the Capital Region. “While these policies govern other states, the LGBTQ+ people of the Capital Region experience higher rates of anxiety and depression when these laws pass. That is why the Pride Center is thrilled to be able to celebrate LGBTQ+ Pride and visibility this year in the Capital Region, especially as our community has been unable to enjoy a full Pride month of activities in three years. I’m personally thrilled that there are an historic number of Progress Pride flag raisings this year in the Capital Region as well; it cannot be stated enough: LGBTQ+ Visibility Saves Lives.”

“WPNA is proud of Albany’s LGBTQ+ community, and we are honored to celebrate the raising of the Pride Flag in historic Washington Park.”, said Shadi Khadivi, President, Washington Park Neighborhood Association. We celebrate the achievements, the resilience, and the determination to fight for all to live freely and authentically”.

Jackaline Ring, President, Center Square Association said, “When I moved to Albany, 27 years ago, part of the compelling appeal was its diversity of residents – all ages, of many ethnic backgrounds, and all sexual orientations. It’s integral to what makes Albany a winner of a city. The PRIDE community is a principal leader in moving Albany forward on all levels and has been for countless years. Hurrah!”

Andrew Harvey, President, Park South Neighborhood Association said, “Not all that long ago, ‘the love that dare not speak its name’ would seek out sanctuary in the anonymity of this glorious park, only to be harassed if not arrested by the authorities for seeking solace in a hostile world. Today, we celebrate a freedom that could again be snatched from us. That freedom is precious and must be preserved. Do not assume that it’s settled law.”