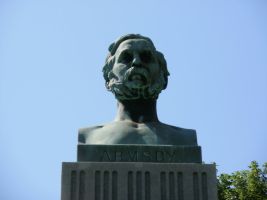 This bust was the first memorial in Washington Park. James H. Armsby was the co-founder of Albany Medical College.

This bronze statue of the famous Scottish poet Robert Burns was sculpted by Charles Calverley,. Each of the four panels around the base features one of Burns’ poems. The Saint Andrew’s Society of Albany funded conservation of the statue in 1978. Read more

This fountain with a monumental bronze statue of Moses smiting the rock for water on Mount Horeb is the centerpiece of formal gardens laid out by William S. Egerton. A gift from Rufus H. King, the statue was sculpted by J. Massey Rhind. The four figures of Israelite slaves around the statue on the side of the mountain represent the four stages of life: infancy, youth, adulthood, and old age. Cleaning and restoration work was conducted on the statue of Moses in 1988. A project to light the fountain was begun in 2017 and will be completed in the summer of 2019.  Read more 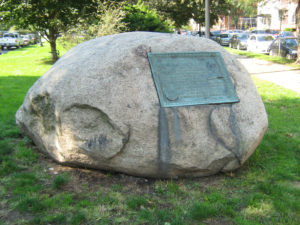 This large boulder, placed at its original location by the Sons of the American Revolution, is a monument to Colonel Marinus Willett, commemorating his combat and character during the French and Indian Wars. Its plaque is dedicated to his “patriotic services in defense of Albany and the people of the Mohawk.”

This marble monument sculpted by Hermon A. MacNeil sits on a granite base, with a bronze statue representing the Nation, holding the palms of victory. The monument represents “The Nation at Peace Won Through Victorious War”. It was erected by the Grand Army of the Republic as a monument to Civil War veterans. Restored in 1986, it was renamed the Albany Veterans Memorial Monument. On October 5, 2012, after another restoration funded by the Washington Park Conservancy, the Monument was rededicated at a ceremony which marked the city’s official observation of the 150th anniversary of the beginning of the Civil War. 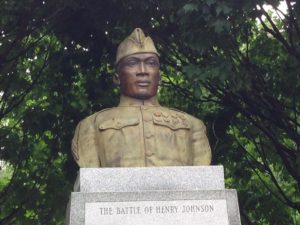 This bust commemorates Albany native, Henry Johnson, who performed heroically in the first African American unit of the U.S. Army to engage in combat in World War I. Johnson was awarded the Medal of Honor by President Barack Obama in a posthumous ceremony at the White House in 2015. Read more