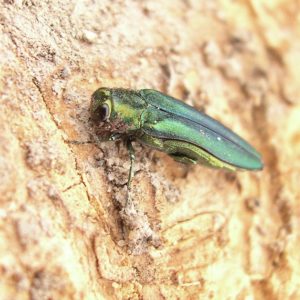 This week, Davey Tree Service, in coordination with City Forester Jay Lavigne, has been treating the Ash trees in Washington Park to control against the Emerald Ash Borer, the invasive pest that has reached local levels that are fatal to Ash (Fraxinus) trees. Many trees in the  City of Albany have succumbed to the damage already, and have been removed.

To prevent the imminent loss of Ash trees in Washington Park, the Conservancy has provided funding to support a bi-annual program of treatment which began in 2015.  The control measures used are effective against the borer and have minimal impact on non target animal and vegetation. 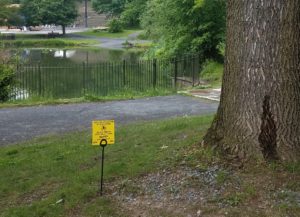 The product emamectin benzoate will be applied by injection in the subject tree’s bark. The pesticide is taken up through the cambial layer to larvae of the insect, feeding on the tree; it is also distributed in the leaves that emerging adult insects feed upon. The product is not disbursed into the air and is inert in the soil, does not contaminate ground water. There are 28 Ash trees in the park that will be treated; Green Ash, fraxinus pennsylvanica and White Ash, fraxinus Americana.

Washington Park is home to many unique tree and shrub species that have environmental and educational value. Protection of this native tree species is significant as we witness its virtual elimination from the native woodlands.

Above: Ash tree near the eastern end of the lake, flagged after treatment