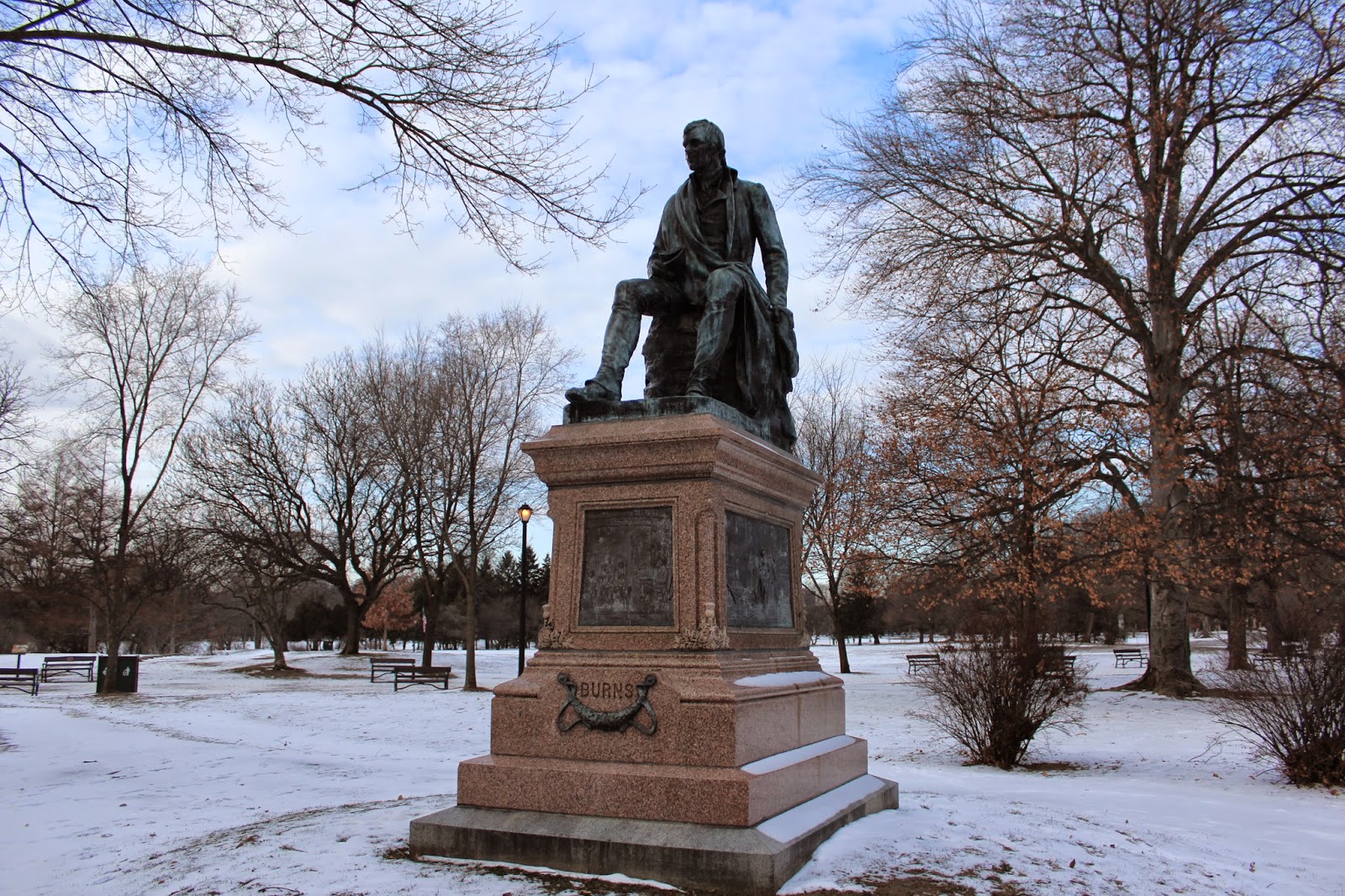 January 25, 2020 marks the 261th anniversary of the birth of Robert Burns (1759-1796), the famous Scottish poet who is celebrated with a monument in Albany’s Washington Park.

You might not know a lot about Burns, but if you sang or heard “Auld Lang Syne” on New Year’s Eve at midnight to mark the end of the old year and ring in the new, you are at least a bit familiar with his legacy.

And that statue you pass during your walks through Washington Park?  The story of the Burns monument reflects the heritage of the many Scottish immigrants to Albany in the nineteenth century, and stands as a monument to the civic generosity and artistic accomplishments and of the day.

Celebrated worldwide, Robert Burns  – also known as Rabbie Burns, the National Bard, the Bard of Ayrshire and the Ploughman Poet – is widely regarded as  the national poet of Scotland and a pioneer of the Romantic movement. During the 19th and 20th centuries, Burns was a cultural icon in Scotland and among the Scottish diaspora around the world.

In 19th century Albany, Burns was particularly beloved by the members of the St. Andrew’s Society of Albany, who were all of Scottish descent.  Organized in 1803, the St. Andrews Society of Albany was founded for “social and benevolent purposes.” The Society grew steadily throughout the 19th century, welcoming Scottish immigrants as they came to Albany and drawing them into the Society’s life. In 1849 immigrant Peter Kinnear became a member. Apprenticed as a machinist in Scotland, he grew as a manufacturer and businessman in Albany.

Kinnear devoted himself to the St. Andrew’s Society and had a gift for bringing people together. As a friend of the McPherson family, who had also emigrated from Scotland, Kinnear was executor of the will of the elderly Mary McPherson, who had no heirs and died in 1886. Mary McPherson’s will set aside funds to build a monument to Robert Burns, and Kinnear commissioned sculptor Charles Calverley to create the monument.

Charles Calverley (1833-1914) began his career as a stonecutter in an Albany marble shop,  then worked as an assistant to the famous neoclassical sculptor Erastus Dow Palmer for fifteen years. In 1868, Calverley began a successful career as a portrait sculptor in New York City; later he created mortuary bronzes for Albany Rural Cemetery.

Standing sixteen feet high, near the Willett Street/Hudson Avenue entrance to park, the Calverley monument in Albany’s Washington Park is a bronze seated statue on a pedestal of Scottish and American granite, with four narrative reliefs around the rectangular base.

The statue was cast by the Henry-Bonnard Company of New York, and the unveiling was held on August 30, 1888. The event was attended by people from all over American and Scotland, with parades and many speeches. At the celebration, the monument was dedicated as Mary McPherson’s gift to the City of Albany, with the words “The McPherson Legacy to the City of Albany” carved on the back of the its pedestal.

The four reliefs around the base of the monument, which were installed in 1891, are unique in Calverley’s work.  They illustrate four poems by Robert Burns: “Tam O’Shanter,” “To a Mountain Daisy,” “The Cotter’s Saturday Night,” and “Auld Lang Syne”. They represent four distinguishing characteristics of Burns’s poetry – the fanciful, the sentimental, the religious, and the convivial.  To develop his composition for the reliefs, Calverley used engravings, a photograph of friends posing, and a painting by his friend George Boughton.

The St. Andrew’s Society of Albany funded conservation of the monument in 1978.

Among the enduring rituals around the legacy of Robert Burns is the tradition of holding a “Burns Supper” to celebrate the poet’s life and poetry, usually around his birthday.  The celebrations include the traditional Scottish dish haggis, toasts of Scotch whisky, and recitations of Burns’s poetry. Locally, Burns Suppers will be held this year at several locations in the Capital Region, including the University Club of Albany on Friday, January 24, and Celtic Hall, the Capital District Celtic Cultural Association, on Saturday, January 25.

Robert Burns also continues to inspire poets around the world.  Local poets celebrate Burns and his influence every year in Washington Park.  Each July, the organization Poets in the Park  gathers at the Robert Burns statue to bring poetry to the park.  The series, which began in 1989, is sponsored by the Hudson Valley Writers Guild & the Poetry Motel Foundation.

Poets in the Park
https://albanypoets.com/